The bus headed from Kingstown, St. Vincent to Dark View Falls, filled with staff members from the Ministry of Tourism, St. Vincent & the Grenadines Tourism Authority, and the National Parks Rivers & Beaches Authority. It was Tourism Week, and our mission of the day was to clean up Dark View Falls after the recent passage of Hurricane Tomas.

Our one and half hour picturesque journey presented scenes of fishing boats in Layou, yachts anchored in Wallilabou and Cumberland Bay, fishing seines at Barrouallie’s jetty, and a few goats and cows along the way. As we passed through Wallilabou, tourists were seen walking towards the Heritage Park, probably anticipating a dip at Wallilabou’s waterfall. 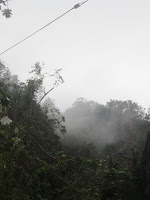 As we continued along the meandering roadway and approached misty mountains, the cool change in temperature was detected. All along the route, the apparent telltale signs on the landscape from Hurricane Tomas became increasingly evident.

Upon arrival at Dark View Falls, some persons stood in awe, amazed at the aftermath images of Hurricane Tomas. The grand over 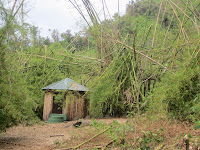 head bamboo archway had disappeared, broken trees, branches and leaves fell everywhere. Yet, swaying proudly amidst all this was the sturdily built suspended bamboo bridge, leading towards the waterfalls. 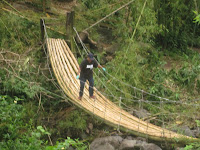 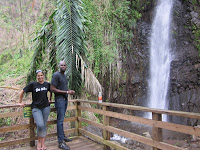 Dark View Falls is an eco-adventure for visitors, as well as a popular picnic site for locals. This spectacular site boasts three waterfalls, along with a pool for bathing, a welcome booth, vending kiosks, and washrooms.

Persons drifted off into sub-groups to commence chores of chopping, sawing, and hauling broken bamboo and branches into designated areas. Some individ 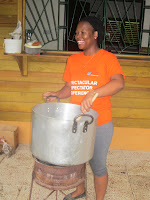 uals raked soggy leaves arduously. While others assembled to cook an outdoor meal on coal-pots. Also, personnel from the electrical service company were seen busily repairing damaged electrical poles. Throughout all of this, a group of visitors appeared from the trail behind the waterfall, as they trekked their way towards a vehicle. 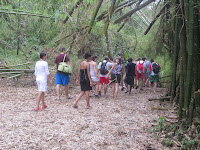 Unfortunately, our clean up was interrupted by a downpour of rain, followed by persiste 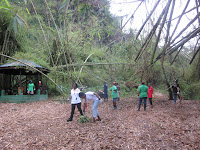 nt showers. This break provided the opportunity for rewards of an outdoor lunch of soup (boil-up) and pelau, along with a cool dip in the waterfall.

As I got ready to depart Dark View for the 24 mile drive to Kingstown, I was rather comforted by the knowledgeable Park Ranger, Maxwell ‘Erasto’ Robertson, who informed us that the bamboo arcade should grow back after a few years.
Posted by DiscoverSVG at 7:12 AM 1 comment: